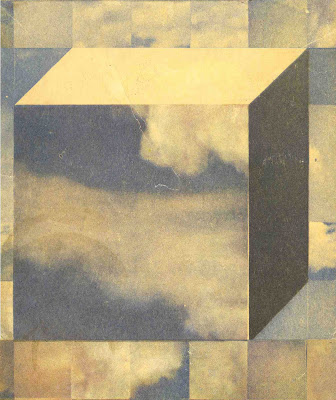 Black Hyperbox started as a frame for performance and text, based on the alienation between practice and conceptualization. Artworks, mostly performances, emerged from its process. They are circulating sometimes independently, sometimes together. Black Hyperbox is also a book that holds incompatible conceptual zones and spatiotemporalities together: Old World and New World, theater and jungle, jaguars and AI, prehistory and futurism, the earthly home and the alien space, Mecca and the North Pole, spaceships lost in cosmos and the politics of Isis, Malevich’s black square and the moon travel, thought and hallucination.

Bogdan Bălan, The Central Metaphor
“[...] the central metaphor will guide the discussion from here onward, it will be helpful to consider an experiment that strongly suggests the purely experimental nature of the self.” (Th. M.)

Ion Dumitrescu, Present by Forfeit
I will not be there

Florin Flueras, Unexperiences
A performer shifts, from time to time, the attitudes and states about what's happening. Sometimes the reactions seem to be related to the space, sometimes to the visitors, sometimes to shared expectations and conventions… Unexperiences works with the automatisms of having an experience – the implicit attitudes and emotions associated with a situation, in this case, of an audience seeing art (performance). More than presenting something to the esthetic sensibilities of the visitors, Unexperiences is interested in how affecting those sensibilities becomes the work, in their bodies.

Adriana Gheorghe, Spoils
Receiving a performance implicitly builds you as a subject. Doubt that subject that you’re shaped into by what is visible and languaged. I devoted myself to hiding most of what I address to you, getting in and out of subjectivities. You’ll be comforted to know that something else is hiding me.

Ioana Gheorghiu, Synthetic Sophisms
Testing reductions with a penchant for denotative perfection and maximum of synthesis: not necessarily false, but necessarily insufficient.
There is nothing else but sound.
C: “How do you say white?” C: “Night.” C: “No. White, not Night.” C: “White.”

Cătălina Gubandru, The Tiger in the Box
The tiger lives in the jungle. No description available for this feature.

Alexandra Ivanciu and Anastasia Jurescu, Re-sistering
In the state of Possession, my false Self possesses my real Self. I turn against my Self. I try to kill my Self and my Sister Self. I am reversed imitation. Once mindful of the Sister, I am her, I am her Self, spinning into the deep Background of the Self. A tribute to Mary Daly.

Cristian Nanculescu, Neither Head Nor Tail
Score for actions, movement, states of mind, people, the empty stage and the memory gap. Contents exhibited that are forming, deforming and erasing themselves. The interpretation of this content is corrupted by the presence on stage and the imagination of the viewer. Without beginning or end.

Alina Popa, Point of Indifference
You throw out a point to see if the space helps you think or do.
Every step deforms the map. Every deformation deforms the step.
You move the point of indifference.
A structure emerges only as that which holds vagueness together.
Leave the point alone in the black box and look.
&
You Are

Cosima Opartan, The Sound of the One Hand Clapping
Hearing tutorial for the sound produced by the one handed clap.

Black Hyperbox book is edited by Alina Popa and Florin Flueras and published by PUNCH.

Black Hyperbox is one of the first Artworlds initiated by Alina Popa and Florin Flueras.